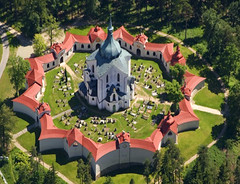 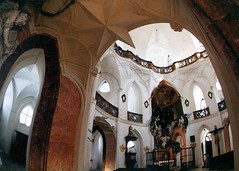 In Hollywood films there are always adventurers seeking for gold treasure-trove and other mysterious items in countries that seem to us rather exotic, while in the Czech Republic itself there is at least one location that is associated with an absolutely unique secret!

The Church of St. John of Nepomuk at Zelená Hora (meaning Green Hill) is an entirely unique building, unlike any other that was constructed in Central Europe during the Baroque period. Why is its symbolism associated with Secret Teachings? And is this place really connected with the Order of the Knights Templar?

An ancient legend speaks of the church - which was constructed in a unique architectural style, defined as Gothic Baroque, as concealing some sort of message that is encrypted in a language consisting of numbers, secret signs and symbols of the mystical Jewish Kabbalah. Which is to say that the author of the project, Jan Blažej Santini-Aichel (1677 - 1723), an inventive Czech architect of Italian origin, apparently knew much more about this site than can be discovered from the guidebooks. The church with an ambit (a circumspherical arcade comprising an underpass and chapels) reportedly actually represents one giant secret code! And supposedly only those people who have been initiated into these secret teachings are able to discern the hidden truth...

"Santini was interested in Kabbalah," states Dr. Mojmír Horyna, PhD. (* 1945), an art historian who is perhaps greatest authority on the architect's work. Santini also wrote in his diary using cryptographic symbols. What does this imply? Santini was a man who literally thrived on codes, hidden symbols and ambiguity. Was it he who also introduced them into the church on Zelená Hora? According to some mystery seekers he was supposedly an expert on secret teachings, information that is also confirmed by a local guide. Did Santini really encrypt some kind of message into the structure of the church? The ground plan of the church has the shape of a five-pointed star, while from above the ambit appears as a ten-pointed star, with five chapels and with five entryways. The number five also features in other areas. Five represents the number of entrances into the church and in the sanctuary itself there are five altars, which is otherwise completely unknown for a Baroque church built between the years 1719 and 1722! Both in the interior of the building and on its exterior six-pointed and twelve-pointed stars appear frequently. Why is this? 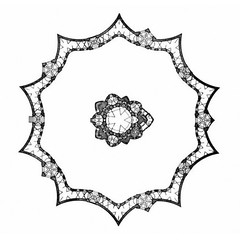 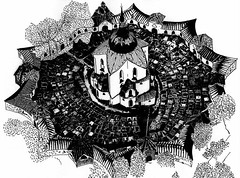 The ground plan of the entire structure of the Church of St. John of Nepomuk comprises a perfect system of concentric circles, in the middle of which is located the central point of the church structure. A surprising and unusual configuration appears when it is viewed from above. The entire structure and shapes of the church is reminiscent of fractals (perfect geometric shapes with repeating elements - Editor's Note). It is generally considered that the widespread awareness of fractals first appeared in the 20th Century! It originated on the basis of the development of advanced mathematical models and access to powerful computers. It appears that possibly Santini was already familiar with them in 1719! The circles, in accordance with which Santini designed the building, resemble the circles on water that are caused by disturbance of the water surface by throwing a stone into it. They form the kind of pattern, through which the waves of many types of energies (e.g. sound) spread in a homogeneous environment. May this be just coincidence?

Beneath the hill a mysterious object is said to be hidden, one that radiates tremendous energy, which even imbues the perfect and brilliantly calculated shapes of the church and of the ambit with its strength. Is this plain nonsense? But then what about the linkage between the design of the church and the knowledge of fractals and circular waves, which, during the Baroque period, was in advance of what was commonly known? Maybe it is Zelená Hora that radiates the energy. The existence of some form of energy in the church has also been confirmed by many sensitives but there is even more compelling evidence for this. Why did the bodies of some monks buried in the crypt below the church not decompose but are discovered to be unusually dried-out? A similar characteristic has been confirmed by many experiments undertaken inside pyramids! Perhaps there is some active force there that bears some resemblance to what is alleged to be pyramid energy. Another specific coincidence is the fact that both in pyramids and in the Church of St. John of Nepomuk, the number five plays an important role – as pyramids have five vertices!

Maybe the mysterious energy is "manifested" by the church itself! The perfectly calculated interior shape of the church not only has excellent acoustics but also, due to both the exact positioning of the windows and to their shape, the church is precisely illuminated by daylight. Was Santini perhaps cognisant of traditional Chinese Feng Shui, the goal of which is to achieve a harmonious flow of energy in a specific space? Perfect illumination also represents a crucial factor in Feng Shui. This association seems hardly credible since, in the 18th Century, China was an isolated country, from where not much information penetrated as far as to Europe! Did Santini draw his knowledge from the archives of Secret Societies or was it just the genius of his abilities that he applied there?

Above the main altar of the church statues of the three angels who support the heavens with the stars can be seen. Is this a symbolic representation of heaven, or is it a secret symbol to insiders of the site’s connection with the universe? The statue of Belief, shown gazing towards the sky, may also symbolise the same fact. Especially interesting is the alternation of gold stars with dark stars. Are they intended to indicate the polarities of the universe? According to Chinese philosophy the entire universe is permeated by two mutually opposing energies – "dark" passive yin, and "light" active yang. Surprising new scientific discoveries confirm this theory. Starlight is complemented by dark matter and black holes that absorb light; as a counterpart to each proton there is an electron with an opposite charge… Is some extra-terrestrial entity hidden beneath the church, perhaps just a meteorite, or maybe something more mysterious?

Was Santini a member of one of the Secret Societies? Apparently so! After all the first known organisation of Freemasons was founded during Santini’s lifetime (in England in 1717). Originally it existed as a professional association of builders, stonemasons and bricklayers. Santini, as an architect, was also active within this environment. Was he himself one of these Freemasons? Was this from where he obtained his extraordinary knowledge? At the same time he was an intelligent man, who thought outside the envelope of his time, something that is a common characteristic amongst Freemasons.  The Abbot Václav Vejmluva, who was a well-educated and good-hearted man also had similar characteristics. Did these two men perhaps keep their secret knowledge hidden in this church?

In some paintings Vejmluva is depicted making strange, unnatural gestures with his arms. Perhaps he is signalling something to his followers who know the "language" of secret symbols. Did the abbot and the builder perhaps agree about hiding some object beneath the church, or did they just happen to be looking for it there? If we abandon the fragile soil of conjecture concerning an object from the stars, a more plausible solution emerges in front of us. According to some claims Zelená Hora has a relationship with the Templars. Wealthy knights of the Temple, following the abolition of their order, were allegedly hiding their vast treasures in many different locations  - one of these, it is said, was Zelená Hora. Why were both Santini and Vejmluva so very interested in the Templars? According to some opinions, the Templars were actually the forerunners of the later Secret Societies... Did the two men both belong to the Templars? The Cistercian Order to which Abbot Vejmluva belonged, for example, was in kinship with the, by then, abrogated Templars.

Studying the map of the Czech Republic, we can discover an interesting detail. Žďár nad Sázavou is situated on a route using which the Templars could transfer their assets from their former headquarters in Prague in the direction of their Moravian dominions. Beneath the church, according to a more conservative theory, the Templar Treasure might be found, and, according to even more bold imaginings, even the Ark of the Covenant or the Holy Grail (mythical objects about the existence of which there are various theories as there are also in regard to their appearance and their purpose - Editor's Note). Both these items were at one time supposed to have been in the possession of the Templars. Are they hidden under the church in Žďár? This might then perhaps explain the strong energy that allegedly emanates from the church. The existence of an extensive underground area beneath the church has not yet been proved, however.

The pentagram, in the shape of which the church was built, represents a symbol of the five elements (solid state, liquid, gas, plasma and one mysterious element - Editor's Note). Based on this information, are we able to discover the essence of the entire mystery? Even according to the guides, there are many blank fields in the history of the church that have not yet been filled-in. We finish our reportage close by the stone slab that covers the entrance to the crypt of the church. On its surface we can perceive a regular cross, flared at the ends – a Templar Cross! Will we ever find a way to decipher your code, Mr. Santini?

Our sister hostels in the historical center of Prague